The Price of Good to Great 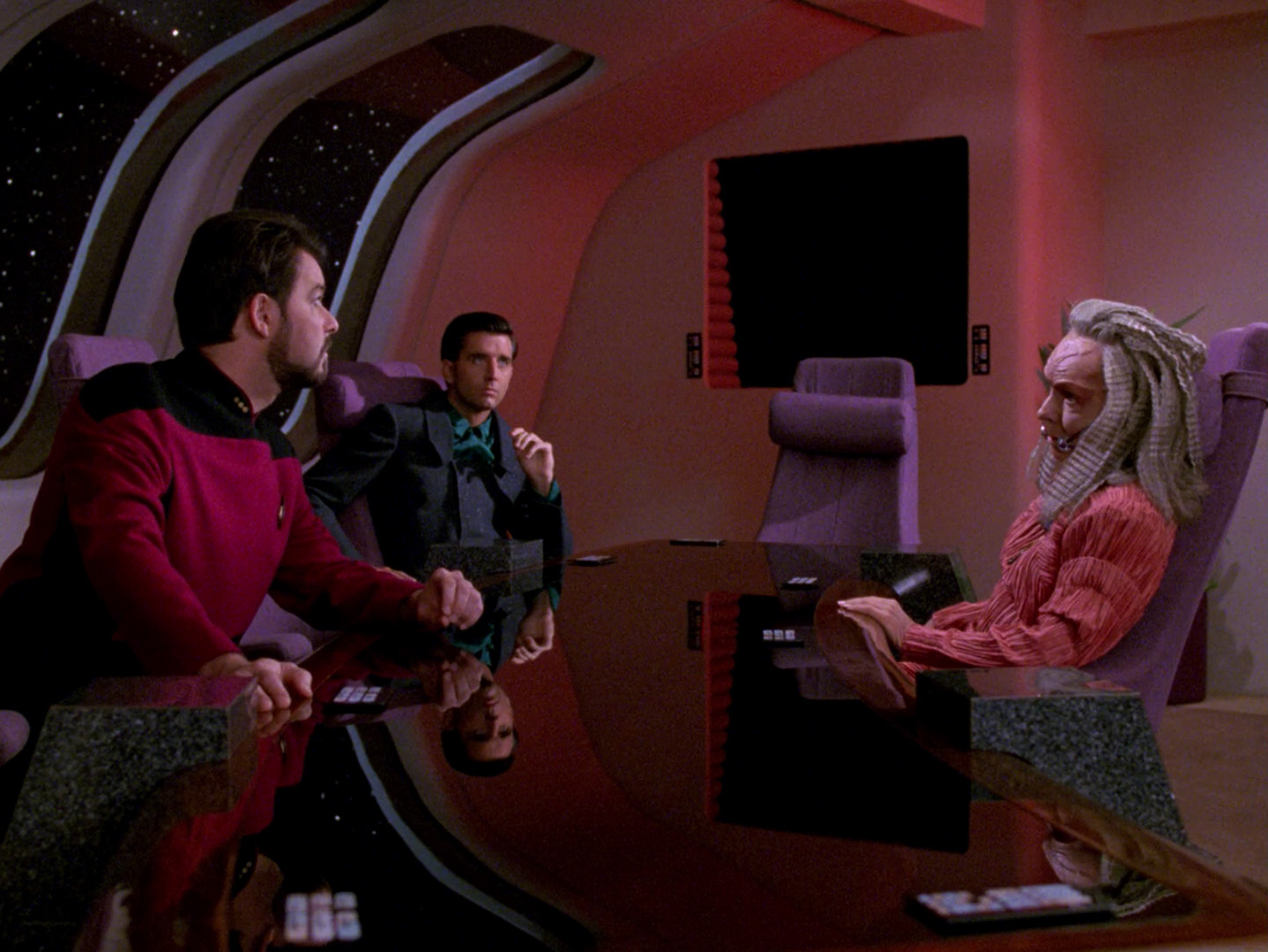 You're a good leader. You’re established in your role. You've been honing your skills for a while. Every day you work hard to guide your team. Things are good. But could they be great? Today I want to ask the question, “How can we move into greater leadership”? Because a leader who becomes complacent will only be “good” for so long. In the 8th episode of the 3rd season of The Next Generation, The Price, we see three areas we can focus on for leadership growth. This is not a comprehensive list of ways to grow from good to great. But it’s not a bad place to start.

This episode finds the crew in a unique situation - a bidding war for a wormhole! The Barzans are selling the rights to a newly discovered wormhole, and the negotiations will take place on the Enterprise. Picard assigns Riker to step in as negotiator for the Federation. Riker has doubts. The first way to move from being a good leader to a great leader is to get comfortable with the uncomfortable. I’m talking about going beyond your comfort zone. We all know that growth happens when we step outside of our comfort zones, right? If you always do the same things and only stick to what you’re good at, you won’t actually grow or develop. At some point, you’ll just be really good at that one thing you always do. For some people, that might be just fine. But I don’t think that’s you. If you just wanted to be decent at one thing, you probably wouldn’t be reading this blog. No, you want to grow and develop.

Does Riker share your desire? To this point, he hasn’t been afraid to take on the unknown. He’s served in a long list of interesting positions, and each one required different skill sets and provided different experiences. When he hesitates, Picard encourages him, saying that he has the base skills and the instincts to be successful. He is very aware of Riker’s skills and abilities; he knows his strengths well. Because they’ve established trust, Riker agrees. So not only is it important to move out of your comfort zone to continue growing as a leader -  you also need to find ways to encourage your team to move out of their comfort zones.

Modeling risk and reward will be a powerful tool here. As Picard has with Riker, establishing trust will be invaluable when the time comes to ask your team member to try something new. Creating a culture of support will also be vital if you want your people to do the uncomfortable. We don't see this in the show, but there is an implicit belief and faith that Riker will have all the support he needs as he tries on this new role. I’m sure Picard has no intention of making this assignment and then leaving Riker on his own. If he runs into problems or has questions, Picard and the rest of the crew will support him as he stretches his abilities. This is how people grow; it’s how they develop. They take on real-life, actual assignments that are just beyond their current skill and experience levels. And, with support from their supervisor and team, they get it done.

Another way to move toward being a great leader is learning how to become an excellent question-asker. This skill adds to your ability to take great care of your people. There is nothing people like talking about more than themselves. So, if you want to establish a positive relationship, ask questions that allow them to talk about themselves. We see Devinoni Ral, the negotiator for the Chrysalians, use this skill effectively with Troi. There’s a weird psychology to encouraging people to talk like this, and I’d like to challenge you to try it.

I challenge everyone I mentor with this exercise. Every person who does it has the same result: they establish meaningful relationships and become one of the more memorable people at the event. Here’s the challenge: The next time you find yourself at a networking event or a meet and greet, I want you to do nothing but ask questions. If someone asks you a question, quickly respond but follow up immediately with a question of your own. Every question you ask has to let that person talk about themselves. Reveal very little about yourself. Don’t tell your jokes or your stories. Just ask questions.

“It’s nice to meet you! What do you do? How long have you been there? Do you have any cool stories about it? What’s exciting to you? I see you have an Oregon Ducks scarf, have you ever been to a game?” Let the conversation steer your questions, but just keep asking. Even if they come back at you, “Yeah, I love the Ducks! We have season tickets. What about you?” Just turn it around. Without fail, you will be remembered, and people will want to interact with you again. Often the most memorable person at an event is the person that talked with everyone but said very little about themselves.

A person I mentored years ago took this challenge. He was very much an introvert, so he had a hard time connecting with others in the workplace and his personal life. At a parent’s night for his child’s little league baseball team, he intentionally asked questions and encouraged people to talk about themselves. I reached out to him while prepping for this post to see how he was. It was about nine years ago that he took the challenge. He said there are three families from that time that he and his family still spend time with.

I cannot overstate the power of this strategy! Just like stepping out of your comfort zone, I also encourage you to apply this with your teams. In one-on-one meetings with your people, give them the floor and let them talk about themselves. When you listen, it is amazing what you will learn.

The last area we’re going to look at for leadership development is the impact of ethics. This is a doozy of a topic and one we cannot thoroughly cover in a single blog post. And I want to be clear that I am by no means an expert! However, this topic is too important to avoid. As a leader, behaving ethically is critical for you to earn trust and represent your teams and your organization. Let’s start the conversation here and continue it over at the Starfleet Leadership Academy Facebook group.

This episode provides the perfect example of differing viewpoints and interpretations of ethics and ethical behavior. As we know, crewmember Troi is an empath. SURPRISE! So is Ral. The difference is Troi lets her ability be known; Ral does not. Troi eventually accuses him of withholding the truth about his empathic abilities, so he can gain an unfair advantage over people and manipulate them, unlike herself, who uses her ability to help people. They are both using the same tool, but to very different ends and in very different ways.

Ethics are, most simply, the study of what is right and what is wrong in human conduct. Ethics are similar to morals, but ethics have reasoning applied to them. Alex Andrews George of Clear IAS says that being moral is about adhering to what is described by society or religion, while being ethical is about figuring out what is right by applying principles and considering all the complexities involved. So ethical behavior is determining how to behave in a morally correct manner or applying morals to a situation.

The question of ethical behavior is brought up in terms of how Ral uses his empathic abilities. He can sense the emotions of those around him. This gives him a tremendous advantage in dealing with other people, especially when negotiating! He discerns, for example, when Leyor is having second thoughts on the process and he uses that to encourage him to withdraw. One could easily argue, and Ral does, that that is simply his job. Find an advantage and exploit it. It just so happens the advantage he found was done so through his abilities that no one at the table knows he has. Morally, you could say that no one is being hurt. It’s just the sale of a wormhole, after all. Or you could question whether or not this is a form of stealing. But the ultimate question is do the ends justify the means?

I imagine you’ve heard that phrase before. It basically means that the outcome justifies what you did to make it happen. As an extreme, and kind of fun example, let’s say you work for a small, local record store that is about to get bought out by a huge chain of record stores. You don’t want this to happen, so when you’re closing you decide to take the day’s earnings and head to the casino. Play some craps; bet it all on red! You end up doubling your money and save the store! Hooray! BUT the fact remains, you stole money from your employer and put it all at risk. Did the ends (saving the store) justify the means (stealing money)? Ral believes the ends justify the means in his life. But what do you think?

Generally speaking, the ends do not justify the means in American society. For example, on August 7, 2007, Barry Bonds hit a record-breaking 756th home run. Awesome, right? Nope. Dude was on steroids or performance-enhancing drugs. He will forever have an asterisk next to that record. The ends did not justify the means. Not in baseball and not in leadership. I hope it’s become obvious throughout my blog that the way you treat people matters. You cannot have a successful business, lead well, or grow a healthy, effective team without a history of ethical behavior. You may be able to achieve an “end” you desire. But you’ll lose clients and employees along the way. That's the kind of “means” I can’t justify. 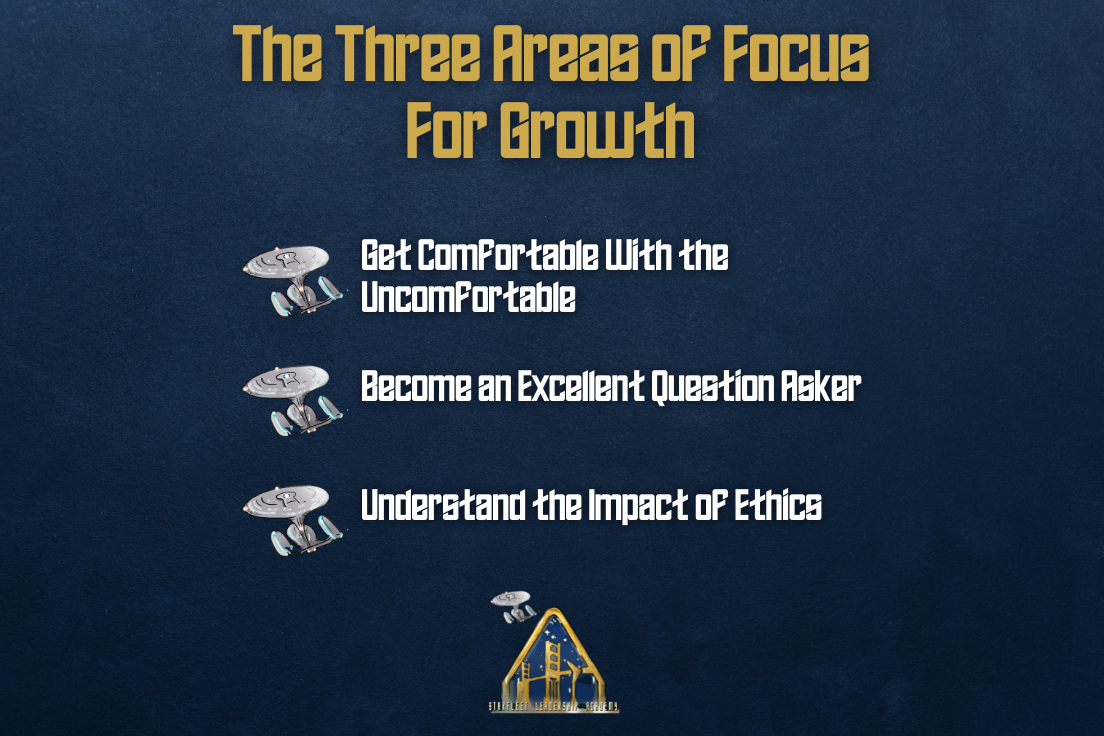 The Next Generation once again gave us a lot to think about in terms of leadership. What do you think of these three areas as focuses for growth? Are you actively moving from a good leader to a great one? Do you have a favorite way to expand your leadership skills or other areas you think are of top importance? Share it with me on any of the socials @jefftakin I’d love to hear!