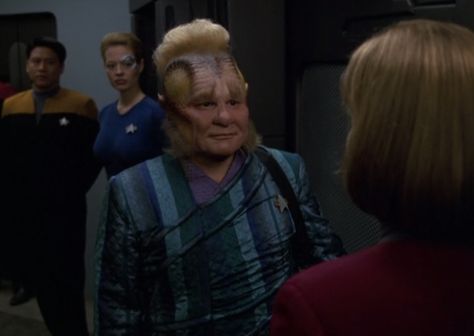 What does it take to develop as a leader? What are the signs that you, or someone you’re mentoring, are growing in their skills? Can you identify the markers of a leader who is ready to move on to their next challenge? Today’s episode - season 7, episode 23 of Voyager entitled Homestead - is a great backdrop to explore these questions. We’re going to see a few leadership gems from Captain Janeway (no surprise there). But the real star of this episode, and I can’t believe I’m saying this, is Neelix. If you’ve read my blog or listened to my podcast then you know Neelix is, without a doubt, my least favorite Star Trek character of all time. But even I cannot deny what he has to teach us.

This episode starts off with a party and Captain Janeway is not shying away from the fun. It is a great example of leadership endorsing fun moments with their teams. Janeway is one to keep a level of professional distance with the crew, but that doesn’t stop her from having a good time with them. This is a fun event, with strong cultural significance, and she is all in! These are the experiences that bond coworkers together and positively impact work later on. Designing and participating in intentional events are priceless in setting the tone for your work culture and building rapport with your team.

The party is interrupted by signs of unexpected life nearby. It turns out there are hundreds of Talaxians living inside of an asteroid! After being forced from their home planet, they found refuge in an asteroid. The problem? A mining crew claims they have the right to destroy the asteroid in order to mine it for anything valuable. Janeway tries to negotiate a compromise. But one cannot be reached. Neelix asks Tuvok for help setting his fellow Talaxians up for success on the planet they’ve selected to move to. Tuvok instead suggests that the Talaxians could take a stand and defend their asteroid. He believes the only piece they are missing is good leadership. And that good leader is Neelix! Filled with self-doubt, Neelix rejects the idea with passion. Many of us experience self-doubt, especially in the face of a challenging situation. What we need, and need to be for our teams, is a voice like Tuvok’s - reminding them of the truth - you have grown, you have developed, and you are up for the challenge! Tuvok knows the abilities of the people on his team and he’s quick to tell them. There are people around us that are academically aware of their capabilities but don’t really believe in them. It is our job to notice what our people are good at and tell them.

Neelix had great leaders in his life who played an active role in stretching him beyond his initial abilities. Their efforts prepared him for this moment when he was ready to unleash his potential as a leader. If your job involves leading then THIS is what it is all about. Find opportunities to develop your team. Try giving an assignment that is just beyond someone’s current abilities. With the proper support, you can create opportunities where your staff can stretch, try something new, even fail, all while learning and becoming better versions of themselves. I expected so little out of Neelix, but his leaders didn’t! Makes me question who I have unintentionally held back because they were my least favorite character on the team if you know what I mean. Tuvok helped Neelix see and accept the potential and the skill he had within him. Neelix validated that belief by leading the Talaxians to a successful defense of their home.

This is part of why we do performance reviews and development plans. If you’re like me a few years ago, you’re thinking, “Performance review? Are you serious? Those are a waste of time!” In a lot of environments, you’re right. For many large companies, the performance review has become little more than another box to check. This is one of the biggest crimes we’ve ever perpetrated in modern work culture. Such a wasted opportunity. So let’s stop wasting it! What would a valuable performance review look like? We saw one in this episode when Tuvok lit the fire under Neelix that was the catalyst for his actions. A performance review is most effective when it takes the shape of an ongoing conversation. Whatever the period is between reviews, observe your team’s job performance. Look for their demonstration of soft skills, areas they need improvement, and ways they are standing out. Then TALK to your employee about it. Don’t just write it up, send it off, and wait for their signature. Tell them what you saw. Help them create tangible action steps to improve any weak areas. And celebrate where they excelled! Tell them what you have observed in them that maybe they haven’t. This is where you can open their eyes, and possibly doors, to opportunities they may not have seen in themselves.

I have a person I work with right now. They do quality assurance work and they’re really good at it. But some time ago, I observed how much they tend to dive into the guts of a process. They naturally look for opportunities to streamline operations. I shared this in a check-in on their development plan - a plan that grew out of their performance reviews and discussions about their aspirations. After our conversation, I was able to send them to a training that inspired them to earn their green belt in Six Sigma and they’re working toward their black belt! They love it because they feel valued and heard in our organization. And I love it because they’ve cleaned up so many of our processes.

And then, and it still shocks me to say this, we have lessons from Neelix. He shows off his leadership skills while helping the colonists set up their defenses. He maintains his calm. He checks in with the various groups working on different tasks. He is endlessly encouraging. He makes it clear that he believes in these people. He took a group of people that had been conditioned to run at the first sign of trouble and led them in an effective defense of their home. My opinion here is that his effectiveness comes from two places. First, the years of training and experience he has received, along with the recently reinforced confidence from Tuvok and his colleagues on Voyager. Secondly - and this is a lesson we can all apply right away - he knows what success looks like. He believes they will be successful because he clearly knows what that end result is. Imagine if we led our teams in this way? I don’t mean like a guiding vision. I mean literally, what does success in your specific project look like? If you’re involved in a project, or if you are working to develop people, imagine what success looks like. What do you see? Do you believe it? Do you believe it’s possible to achieve that success? Take a page from Neelix here. Having that picture in mind and believing it makes all the difference.

So here we have Neelix - a humble "cook" turned great leader thanks to the consistent care of the leaders around him. But he’s ready to leave. The Talaxians need a leader and he wants to take on that role. Many people would want to keep him to themselves, so they can benefit. They might even feel like he owes them. But it’s not about them. It’s about Neelix. It’s about your employee. Yes, you invested in them, you developed them. But do you want them to feel obligated to you or do you want them to be able to do what they want to do? Do as Janeway does and let them leave. Let’s them use those skills and unlock their potential elsewhere and it just might come back to you in the end. I’ll give a real-life example. I used to work with this amazing person, Aaron. He was brilliant, eager to do good work, and hungry to do the most he could do. I worked closely with him, giving him opportunities to stretch beyond his capabilities. He eventually developed and demonstrated the skills necessary to be promoted and move to the next level. I had opportunities for him. He could have stepped up in my organization and I could have directly benefitted from his development. But his passion was for other work. With my support, he was promoted to a critical role in HR. It kind of sucked, to be honest. I felt like I lost out. But here’s where it gets cool. It didn’t take long until our work intersected. We found ourselves in meetings together as he supporting our work from the HR side. Our relationship and the investment I, and my team, made in him paid off time and time again as he helped us through difficult problems. By releasing Neelix from Voyager, Janeway gained a valuable asset in the Delta Quadrant. By releasing my former employee, I gained a valuable colleague who was able to have a greater impact across our whole organization. It was absolutely worth it to help him and support him in leaving to do what he actually wanted to do.

So, what are your thoughts on this episode? How do you develop the people on your team? Do you utilize performance reviews? Have you ever had to let someone you invested in go? What do you think of Neelix? Let me know! I’m on all the social media @jefftakin If you have enjoyed this blog, please share it with a friend or someone you think could benefit from it.