The Next Generation of Leaders: Picard and Riker 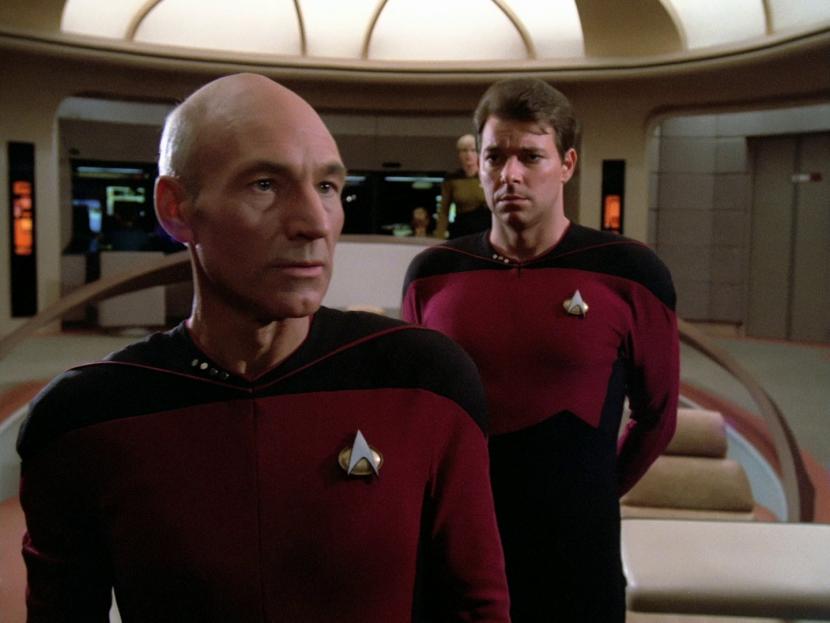 As the premiere episode in the new series, Star Trek: The Next Generation, Encounter at Farpoint introduces us to Captain Jean-Luc Picard and William Riker. Here is our first chance to consider what kind of leaders they are and what we can learn from them. I’ll be honest, I don’t think the writers had a really good idea of who the characters in this episode were and many of the actors had even less of an idea. Much character development remains to be seen. However, there are a few observations we can make and learn from.

Let’s start with Riker. When we first see him, he’s friendly and cordial. But in a heartbeat, he transforms into a full military persona in the presence of another military man. We don’t really see that out of him again as he starts to settle back into the role of a charismatic leader. He praises Worf, jokes with Data, and isn’t afraid to lean into an existing relationship to gently get control of a situation. All of these moments point to the importance of connection in leadership. For example, when Riker needs Data’s help, he takes the time to get to know him. Finding out that Data wants nothing more than to be human leads to a friendly nickname of “Pinocchio” and an inside joke is born. This kind of shared experience will go far in endearing Riker to his crew.

We can also see the value of confidence when leading. When Picard gets on Riker’s case about not allowing Captain DeSoto to go on an away mission, he stands his ground. He respectfully pushes back on Picard’s assessment of the situation. This is a testament to Riker’s confidence and experience. He knew he had done the right thing and defended his actions. Picard ultimately respects that in him and it completely changes the tune of their relationship. From what we saw of Riker in this episode, we can expect to see a leader that people gladly follow. Do you lead in a way that makes people happy to follow?

Now let’s look at Picard. He is a multifaceted leader with strengths anyone can learn from. First, he too is supremely confident. As an experienced, tactical, and strategic military leader one would expect nothing less. We see his first flash of leadership when he stands up to Q, the mysterious being that appears out of nowhere. Picard questions Q  directly, showing great physical confidence. He is Captain and he acts like it. Related, is his bravery. Picard’s bravery and commitment to his role places him between danger and his people. He surrenders to Q to protect the others, he doesn’t budge when the creature demands obedience from him, and he ignores its taunts to focus on leading his ship. He stares death in the face and doesn’t back down. Unflappable, one might say. Picard has confidence right up to the line of arrogance or bravado, but not crossing it. Which is a delicate line to walk. Are you able to lead with confidence?

Another amazing tenant of Picard’s leadership is his ability to self-correct. He can admit his mistakes and mend what needs repairing. When he snaps at Dr. Crusher for bringing a child on the bridge, he quickly changes his tune after remembering the personal connection between them. He also seeks her out to make amends later on. He tends to be a stoic man but is also able to warm up and display care when appropriate. In humility, Picard shares with Riker that he is not a family man and isn’t comfortable around children. He asks Riker to help him project an air of congeniality. Are you aware of your areas of growth? Can you look to others in your organization for help? Do you notice when you act poorly and self-correct in response?

Lastly, Picard draws out nothing but the best from his comrades, and often in the toughest of situations. As Captain, he holds himself to a high standard. As a good leader, he calls the people around him to that same potential. In one instance, Yar starts making recommendations to fight and Picard cuts her off. He questions her and then, kindly and earnestly, says that he’d like to “hear [her] advice.” She rethinks her position and gives more sound advice. I love this scene! Picard’s methods were so effective. He didn’t get emotional, even in a dangerous and escalating situation. He didn’t discount Yar’s input. He welcomed it!  But with his tone, he was able to communicate that she was headed down the wrong path. Picard’s ability to often separate emotion from his decision-making and communication should pave the road for some excellent examples of leadership later on.

So what do you think? What are Riker and Picard’s top qualities? What could you learn from them? Do you connect with your team, utilize confidence, self-correct, and inspire those around you to improve? What’s one new goal you could start working toward today to put one of these leadership skills into practice? Join me next time as we continue to grow in our ability to lead through the tool of Star Trek!